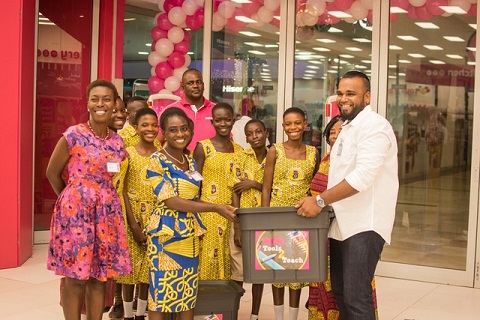 Today marks the official opening of two new Game stores in Accra by popular retail chain; one in West Hills Mall and one in Achimota Retail Centre.

The Game store in Accra Mall has undergone a major facelift and is also relaunching today.

Since Game’s debut into Ghana in 2007, the company has supported the development of education. In honour of today’s launch of the new stores, the company last night donated stationery kits to two local schools as part of one of the group’s flagship social responsibility programmes; Tools2Teach.

Handing over 20 of the Tools2Teach kits to three schools at a launch cocktail event last night, Game West Hills store manager Salisu Mohammad said that the company had identified education as a key development area.

“Through consultation with local community members, we established that the ongoing development of education is a priority here. The deserving schools; Qubbatul Kadra, Dampase D/A Model School and Bortianor Methodist Basic School were identified by local charity United Way of Ghana, who facilitates the support of the Ghanaian education system”.

“This is parallel to the social responsibility strategy run out of Game’s head office, which aims to make a tangible difference to primary school education in the areas in which we operate”.

Each Tools2Teach kit is a large stationery box that is custom-designed to assist pupils and contain a range of classroom tools, including calculators, pens, pencils, sharpeners and other educational equipment.

‘When Game first launched in Accra in 2007, the company identified a local school and supported them for many years, donating stationery, building on an extra classroom and supplying other educational equipment. This current donation is a continuation of our social investment programme in Accra.

‘We appreciate the ongoing loyal support from our customers in Ghana, as this enables us to continue to support education for children in the communities within which we operate.

Game West Hills is the 25th Game store outside of South Africa’s borders, while Game Achimota is the 26th. The two new locations will make the Game more accessible to the greater Accra residents, and shoppers who travel from further afield to take advantage of the discount prices.

All three stores will have phenomenal opening deals which will be valid for four days only – from 29 November to 2 December, while stocks last. If you missed a Black Friday special, here’s your chance to get a great deal.