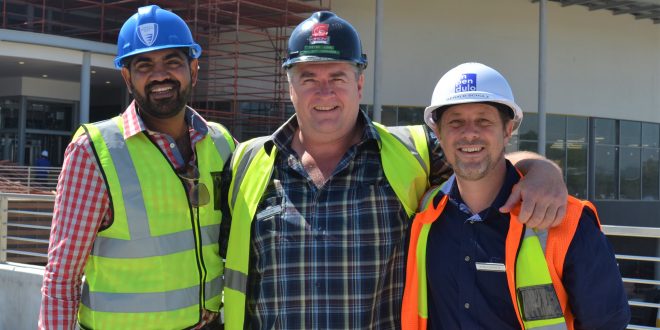 After years of planning and hard work from the project team, the construction of Liberty Midlands Mall’s Phase 3 development commenced in November 2016, and will be completed and ready for trade in March, 2018.

Since opening its doors in 2003, Liberty Midlands Mall has established itself as the retail destination of choice in the KwaZulu Natal Midlands. Over the years, the mall has grown to cater for the retail needs of its customers and measured a remarkable 56,000m² amongst its first two phases. Based on the success experienced, and further demand for space within the mall, from both local and international retailers, the launch of the much anticipated Phase 3 expansion has come. Phase 3 presented an opportunity to enhance the tenant mix, catering for the broader needs of Liberty Midlands Mall customers.

The Phase 3 expansion will introduce retail and leisure space of almost 22,000m2, increasing the size of the mall to an impressive 78,000m2, parking space that will accommodate over 3,000 vehicles, and will ultimately welcome several ‘firsts to the PMB market’ retailers to the mall.

Liberty Two Degrees’ Asset Management Executive, Brian Unsted announced; “The mall’s new Phase 3 expansion is adjacent to the existing mall and will include a lifestyle centre, made up of both retail and leisure components. The increased retail offering within Phase 3 aligns itself with Liberty Two Degrees’ commitment of enhancing customer experiences and exceeding public demands within its retail portfolio and binds to the strategy of strengthening Liberty Midlands Mall’s presence in the KwaZulu Natal Midlands”.

Since the original opening of Liberty Midlands Mall, spending patterns have transformed within a 50 kilometre radius. Prior to the existence of the mall, the PMB community had to travel considerable distances to access some of the country’s most prominent outlets. Anchored by tenants such as, Pick ‘n Pay, Game, Woolworths, Dischem and Edgars, Liberty Midlands Mall answered the call for retail convenience, and is home to over 160 stores with an average foot count of approximately 650,000 loyal shoppers per month.

“The Phase 3 expansion brings the tenant count to over 200 stores, and has provided the space for brands we could not previously accommodate. We have welcomed Volpes, Coricraft, Pick ‘n Pay Clothing, Tekkie Town, The Hub, Just Plastics and Rochester to the mix, amongst others. RocoMamas and Mozambik will be two of the five restaurants in Phase 3’s indoor-outdoor, alfresco style dining offering. Phase 3 will be anchored by Checkers”, continues Unsted.

In addressing the strategy behind choosing tenants to occupy Phase 3, Unsted stated that, “providing ‘firsts’ to the Pietermaritzburg market was a major factor when selecting new tenants, alongside the relocating and extending of already in-demand brands”, and that “the continued growth of the mall showed that it met a very real and growing retail need within its catchment area”.